Dumouriez against the Convention

We are pleased to offer for sale a remarkable autograph letter signed by Lazare Carnot, then a member of the Revolutionary Convention, of which here is a reproduction: 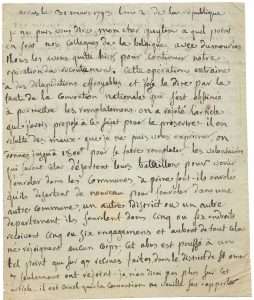 “I believe Dumouriez is a monster, try to find a man who
can replace him and have him tried very quickly”

This letter informs us about Carnot who, not only understands what is going to happen, but what is happening before his eyes, and in the sight and knowledge of just about everyone – at least the whole Convention, and the Parisian crowd that then takes the place of Public Opinion.

His views on Dumouriez are equally cyclical.

A) Indeed, let’s not be deceived on the words Carnot uses: these are the words of his time, always excessive, always peremptory, always oratory, but which do not rest on a real background.

B) As far as Dumouriez is concerned, he wins in Valmy against the Prussians, then jemmapes against the Austrians, he is not a traitor for this purpose. Nor is he a monster, as Carnot says. But what everyone knows is that he is not in favour of the slow but dangerous drifting of the Convention since it granted itself the right to sue Louis XVI, and since his republicanism turned the defence war (Valmy and Jemmapes) into a war of conquest (annexation of Belgium soon transformed into French departments). 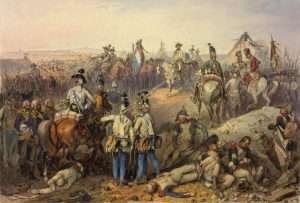 C) Although Dumouriez is a great general, he remains a poor politician. On 12 March, he informed the Convention by writing to its President Brard, to tell him that he was returning to Paris with his army in Paris to dispel this Assembly of madmen and criminals… This is a first mistake; on 18 March, in Neerwinden, he was defeated by the Austrians, which everyone knows, Carnot like the others.
Second mistake: to dispel the Convention Dumouriez needs a victorious army, not a defeated…
Third mistake: Dumouriez, instead of marching immediately with his army on the Convention, waited in an attempt to gather those who would have followed him again. He wasted time. These twelve days, between March 18 and March 30, the date of Carnot’s present letter, allowed the Convention to recover and prepare for Dumouriez’s loss in advance.

D) Dumouriez does not desert: he chooses a political system other than the Republic, which in March 1793 is forbidden to any citizen: one is a republican, or one is an enemy of the nation soon guillotined. His departure is a political gesture.
His last mistake was to believe that this gesture would be accepted if not approved by the Austrians. But, being also the one who defeated the Austrians at Jemmapes on November 6, 1792, he was one of two who consolidated the Republic in its early days, paving the way for the trial of Louis XVI. The Austrians won’t forgive him. They therefore refuse to grant him asylum, and reject him outside the territory they dominate (first Switzerland, then Hamburg…).

Dumouriez (by Jean-Sébastien Rouillard, 1834), considered a traitor to the Nation by the Convention as early as April 5, 1973

Finally, let us not forget to whom this letter is addressed: Louis-Bernard Guyton de Morveau, a renowned chemist and still a young collaborator of the Encyclopedia, is one of those members of the Legislative Assembly who became a Member of the Convention in 1792. He immediately sided with the Montagnards, being one of those who voted for the death of Louis XVI… Carnot is speaking here to someone who thinks like him… [As a side note, Guyton is one of those who observed the Battle of Fleurus from a hot air balloon on June 26, 1794]

The practice of desertion of a regiment for which one has volunteered, but which one leaves stealthily to go back to another regiment, is as old as volunteering! This was one of the misfortunes of the Royal Army, before the lifting of 300,000 men first imposed some kind of compulsory service (before conscription, which dates back to 1798). This misfortune then took on a much greater proportion than in the old system, especially with the Mass Raising, decreed in February 1793; it works very badly (relief of the Vendée). In principle, each department had to provide volunteers and supplement the required staff by requisitioned young men, but these may be replaced by a non-requisite who would be voluntary. Hence this trafficking of commitments, because the replacement is for money. And prices are rising fast (the law of supply and demand). Carnot, a conventional and army general, sees concretely the evils of desertion. He himself was unfavourable to the replacement.

We warmly thank Jean-Pierre Bois for his valuable
observations for the creation of this article.