Emile Zola in the Dreyfus Affair 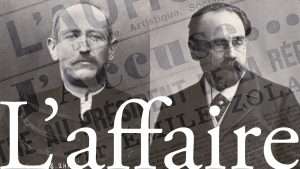 This text was written by Zola at the very beginning of his exile in London on 19 July 1898, the day after the trial in the Cours d’assises held at Versailles on 18 July. It will lead to the conviction of the novelist. This text aims to justify his departure into exile, offering an answer to all those who then accused Zola of fleeing justice. The circumstances surrounding the writing of this article are well known through various sources: Zola’s correspondence, the newspaper the writer kept during his exile (later published as Pages of Exile), as well as a note that Bernard Lazare left on these events. 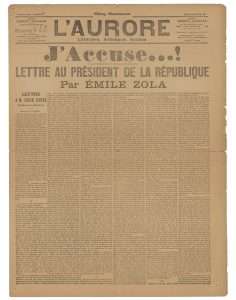 The Versailles trial is the third trial that Zola had to endure following the publication of “J’Accuse…!” in L’Aurore on January 13, 1898. The first trial, the most famous, lasted from February 7 to 23. It took place in front of the Paris Cours d’assises with fifteen turbulent hearings at the end of which the novelist was sentenced, for defamation, to the maximum possible penalty: 3000 F. fine and one year in prison. 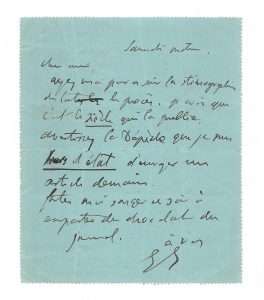 On 2 April, the Court of Cassation quashed this conviction for defects of form. A new trial ensued before the Versailles Assize Court on 23 May; it lasted only one day, as Zola’s lawyer, Fernand Labori, immediately filed for cassation. This appeal was dismissed by the Court of Cassation on 16 June, which resulted in Zola’s third and final trial before the Cours d’assises, again in that year 1898. This time, summoned again to Versailles, the novelist was definitively condemned, but in order to avoid the sentence being officially communicated to him and took effect, he left Paris that evening and fled to London. He made this decision on the advice of Labori and Clemenceau, who found such a strategy effective because it allowed them to save time by suspending the execution of the judgment that had just been handed down. 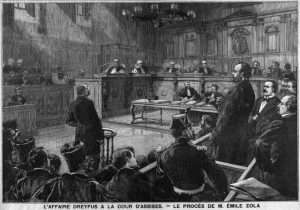 Zola arrived at Victoria Station in London on the morning of 19 July and went down to the Grosvenor Hotel, an address indicated to him by Clemenceau, upon his departure. On the hotel’s records, it is written under a false name, that of “Mr. Pascal“. During the evening, alone in his hotel room, he writes until midnight a long article for L’Aurore in which he explains the reasons why he left France (as stated in his Pages of Exile).
The next morning, July 20, Zola receives his friend Fernand Desmoulin, who travelled overnight and arrives directly from Paris, at the Grosvenor Hotel. Desmoulin came to comfort him and brought him news of his wife Alexandrine, as well as Jeanne Rozerot and his children. 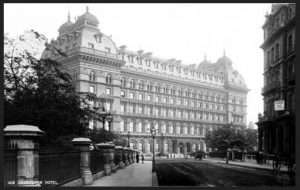 The Grosvenor hotel in London, first stop of Zola’s 11 month’s exile and where he wrote “Pour la Lumière”

Desmoulin is accompanied by Bernard Lazare, whom he met at the Gare du Nord, at the time of his departure, and with whom he made the trip. Lazare, sent by Clemenceau and Labori, is tasked with a mission. He left a note of this encounter, at the request of Joseph Reinach, about his role during the Dreyfus affair. Zola seems a little lost to him, distraught in this great city where he knows no one. “Our presence made him feel good” he observes. And he adds this remark, which relates to the purpose of his trip to London: “I was in charge of explaining to him why L’Aurore had not published a large paper of him that was denied unwise. He took the matter well and changed what he had to say.” That very morning, in fact, was published in L’Aurore, under the title “Pour la preuve“, an article signed with Zola’s name, but written, in fact, by Clemenceau. Bernard Lazare was responsible for showing Zola its content. Zola agreed with what is proposed to him. He gave Bernard Lazare the manuscript of “Pour la Lumière.” Lazare then left for Paris in the early afternoon, taking the manuscript with him.

Written on the evening of July 19, 1898, the five sheets of “Pour la Lumière” were composed in a small room on the top floor of the Grosvenor Hotel, in which the writer felt like he was in a prison: “the window was locked by the open frieze that crowns the entire building: a taste of the prison” (extract from his Pages of Exile). 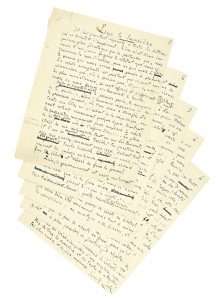 “From all my letter to the President of the Republic, a few lines had been skilfully extracted, limiting the prosecutions only to prevent the truth from emerging on the Dreyfus case. The plan was to condemn me while gagging me.”

The article offers a reflection on the series of trials that have just taken place. The chronological framework is specified. At the end of the text, an explicit reference is made to the trial just held in Versailles: the term “Monday“, used twice, refers to the day of Monday, July 18. Retracing the past year, Zola first refers to the “fifteen hearings” of the February trial. Then he talks about the two trials that followed, before the Court of Assizes of Versailles. The first trial was held on 23 May, when the parliamentary elections had just taken place (8-22 May); it took place before the meeting of the Chamber of Deputies and the coming to power on 28 June of the cabinet headed by Henri Brisson, succeeding that of Jules Méline. Zola then alludes to the speech of Cavaignac, the new Minister of War, delivered before the House on 7 July, a speech immediately followed by a public display, because of the enthusiasm of the Members who believed, for a moment, the Dreyfus case finally settled. But the evidence put forward by Cavaignac had no value. They were immediately denounced as false by Picquart. Ironically, Zola points out the minister’s unwitting help to the dreyfusard “cause“! He then referred to the arrest of Esterhazy, who intervened at the request of Judge Bertulus on 12 July. The succession of these events obviously provides a strong argument for the novelist. It is impossible, he shows, to judge him in the situation that was his after the publication of “J’Accuse…!” Within a few months, the Dreyfus case had changed dramatically. Justice must take these new developments into account. 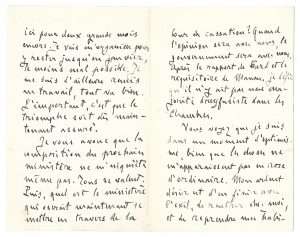 The writing of “Pour la Lumière” thus opens up, for Zola, the long period of exile that will last, practically, an entire year. The author of “J’Accuse…!” had to leave France. He is now out of the fight. Although he did not agree with the choices made by Clemenceau and Labori, he accepted the situation, as shown by the agreement he gave to Bernard Lazare on the morning of 20 July, letting him go with these five leaflets that would never be printed. The last lines of “Pour la Lumière” express the pain of a man who is preparing for the long ordeal of exile and who proclaims, one last time, his love for the truth: “We will remain the impassive soldiers of the true, incapable of a step back, capable of all the sacrifices and all the expectations, the harshest and the most anxious.”