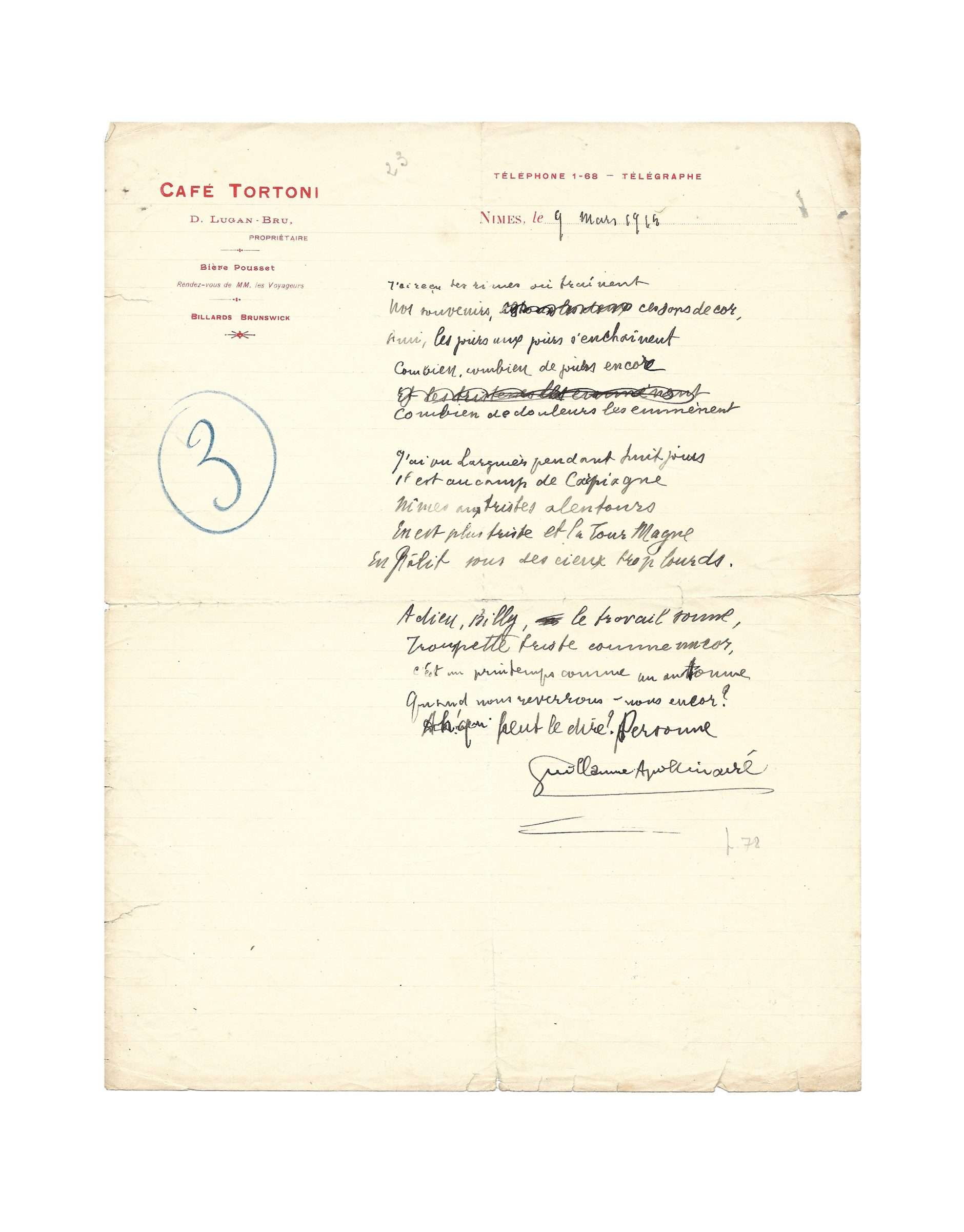 Admirable poetic epistle of Apollinaire, unpublished in its manuscript version, from the Café Tortoni in Nîmes where the poet had his habits

It is always moving, even when the text is known, to discover its first handwritten version. This is the case for this poem, part of an epistolary exchange between Apollinaire and his friend André Billy (1882-1971) during the war of 14-18, in March 1915, unveiled after more than a hundred years.

This poem is a response to a letter in verse by Billy, dated March 7, 1915 (we note the performance of the Post Office to the Armies!):

We note the presence of a punctuation that will not be included in the publications. Billy punctuated his poems, Apollinaire could be trained in spite of himself to do the same, especially since in his epistolary poems punctuation often comes naturally under his pen. The first draft that can be deciphered in verse 2 under the corrections is replaced by a less banal expression (“Nos souvenirs, à tous les deux” becomes “Nos souvenirs, ces sons de cor”, echo of Billy’s last verses which quoted a poem by Apollinaire). In the 5th verse, “pains”, stronger, replaces “sorrows”.

Billy, in March 1915, had remained in Paris, where he was annoyed, while Wilhelm de Kostrowitzky following his voluntary enlistment was training in Nîmes in the artillery and used abundantly the stationery of the Tortoni café where he had his habits. André Billy, who also teased the muse, was a journalist and in August 1915 he was going to publish in the Mercure de France part of their “Correspondance poétique”, taking care, however, not to write the names in clear. The numbers in blue on the margins of the manuscripts are probably intended for Mercure.

André Billy had commented on this publication almost on the spot: “Young writers, torn by the war from their favorite occupations, have adopted a charming use: they correspond in verse, which proves at least, we will agree, a morale of all rest. We have before us a number of these poetic epistles. Let us hope that someone, later, will bring them all together. They are valuable literary and psychological documents. »

This means that these poems written quickly without a doubt were however more or less clearly intended for publication. The authors were aware of the testimonial value of these exchanges and took care of their texts. As early as 1923, André Billy published this correspondence in his Apollinaire Vivant, with his own poems reproduced above, which only Apollinaire’s allusions can illuminate: their mutual friends, the Cevennes Léo Larguier, who will be wounded in September 1915 and will later sit like Billy at the Académie Goncourt.

These exchanges testify, among other things, to the need for soldiers far from their intellectual and emotional background to keep in touch to endure the separation. If Apollinaire in March 1915 had not yet known the front, he already knew that death was lurking.