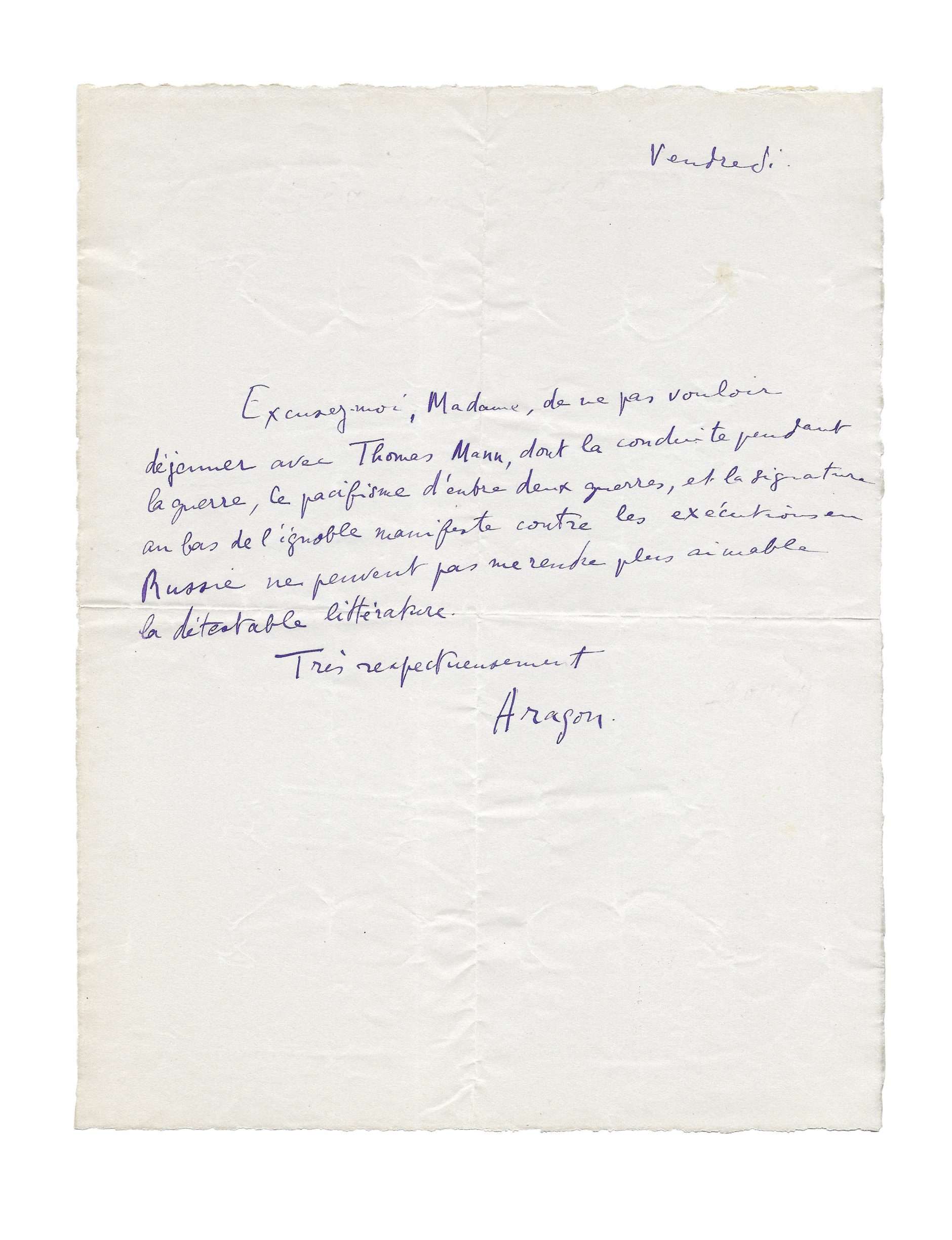 Violent reproaches of Louis Aragon against Thomas Mann – The poet explains his hostility to the idea of meeting the German writer, then on an official visit to Paris

Thomas Mann officially received in Paris in May 1950

At the beginning of May 1950, Thomas Mann had begun a European lecture tour. On May 12, he arrived in Paris, accompanied by his wife Katia. At the “Ritz”, where his French publishing house has booked a suite, they receive a very warm welcome.
If during his stay in Paris, which must have lasted a few days, Thomas Mann could not see André Gide himself, he spoke with Jean Schlumberger who had created with Gide La Nouvelle Revue Française. In the quick note he wrote for the bookseller Martin Flinker, Mann mentions the “incredible beauty” of the capital of France and a [French] civilization at the “forefront of progress”… while confiding to his Journal his great fatigue and the aversion he felt for “the French linguistic sphere”.
He is indeed irritated by interviews that he considers malicious – such as that of Dominique Arban for Le Figaro, who asks the author of Doctor Faustus if, judging by his book, it is possible to imagine a new Germany in which would have disappeared “the vertigo of obedience and blood”. The interviewers’ reminder of Paul Olberg’s letter, published in the Swiss newspaper Volksrecht, also disturbs him to the highest degree. The Swedish journalist had indeed asked Thomas Mann how “he who had fought without concession Nazi Germany had been able to accept in 1949 the invitation of a regime [that of the GDR] which trampled underfoot with the same brutality freedom and humanity”.

At the end of the Second World War – after the election in 1945 of Harry Truman as President of the United States and until 1949 – Thomas Mann was sensitive, like many intellectuals of the time, to stalinist propaganda that presented the United States as an imperialist power, ready to trigger a new conflict – and the USSR as concerned only with peace and the happiness of the peoples. Thus, in March 1949, he supported the initiative of Harvard professor Harlow Shapley to convene in New York a world peace conference – directed against the Atlantic Pact finally signed on April 4, 1949 – in which 24 delegates from communist countries participated, in which Thomas Mann saw only “pure idealists”. He telegraphed Dean Acheson, the U.S. Secretary of State and father of the Marshall Plan, to reconsider his ban on allowing other delegates from communist countries to enter American territory. Silent about the deportations and mass executions ordered by Stalin, he does not miss an opportunity to protest against McCarthyism and “anti-communist hysteria”, driven to this by his son Klaus and daughter Erika.

Thomas Mann still enthusiastically accepted the invitations – issued by the newly formed Federal Republic and the other part of Germany that would proclaim itself the “Democratic Republic” – to preside over the ceremonies given in July/August 1949 for the bicentenary of Goethe’s birth, first in Frankfurt (West) and Weimar (East). Flattered by the honors that are rendered, he wants to believe that it is only literature and does not want to see the instrumentalization to which he is the object of the communist leaders.

But soon after, sensitive to criticism and becoming more far-sighted, he refused to participate in the “World Congress of Supporters of Peace” which took place in Paris from 20 to 23 April 1949 under the patronage of Picasso (with his famous “dove”) and Aragon.

Louis Aragon‘s refusal to see Thomas Mann on the occasion of his official visit to Paris in May 1950 was thus explained by the hope aroused in the communist camp by some of his statements. The most prestigious German writer of the time, an emeritus fighter of fascism since his American exile, fundamentally hostile to the western part of Germany which he thought had not really got rid of Nazism, represented a vector of propaganda of the highest order for the ideologues of communism. The spite felt by Louis Aragon and others following the defection of Thomas Mann is commensurate with their disappointment.

The many criticisms that Thomas Mann unleashed in the West helped to make him fully aware of the role that was intended to make him assume; this is how he declined the invitation to the 2nd Peace Congress organized in London from 13 to 19 November 1950. The English government banned Pierre Cot and Louis Aragon from entering British territory. The non-admitted delegates finally met in Warsaw. The organizers claim to have received a message of encouragement from Thomas Mann and even to have elected him to the office of the organization – which he firmly denies. In a scathing denial, Thomas Mann says “he no longer wants to do anything with politics”. All relations are permanently cut off.

We thank Mr. Maurice Godé for his help in the development of this description