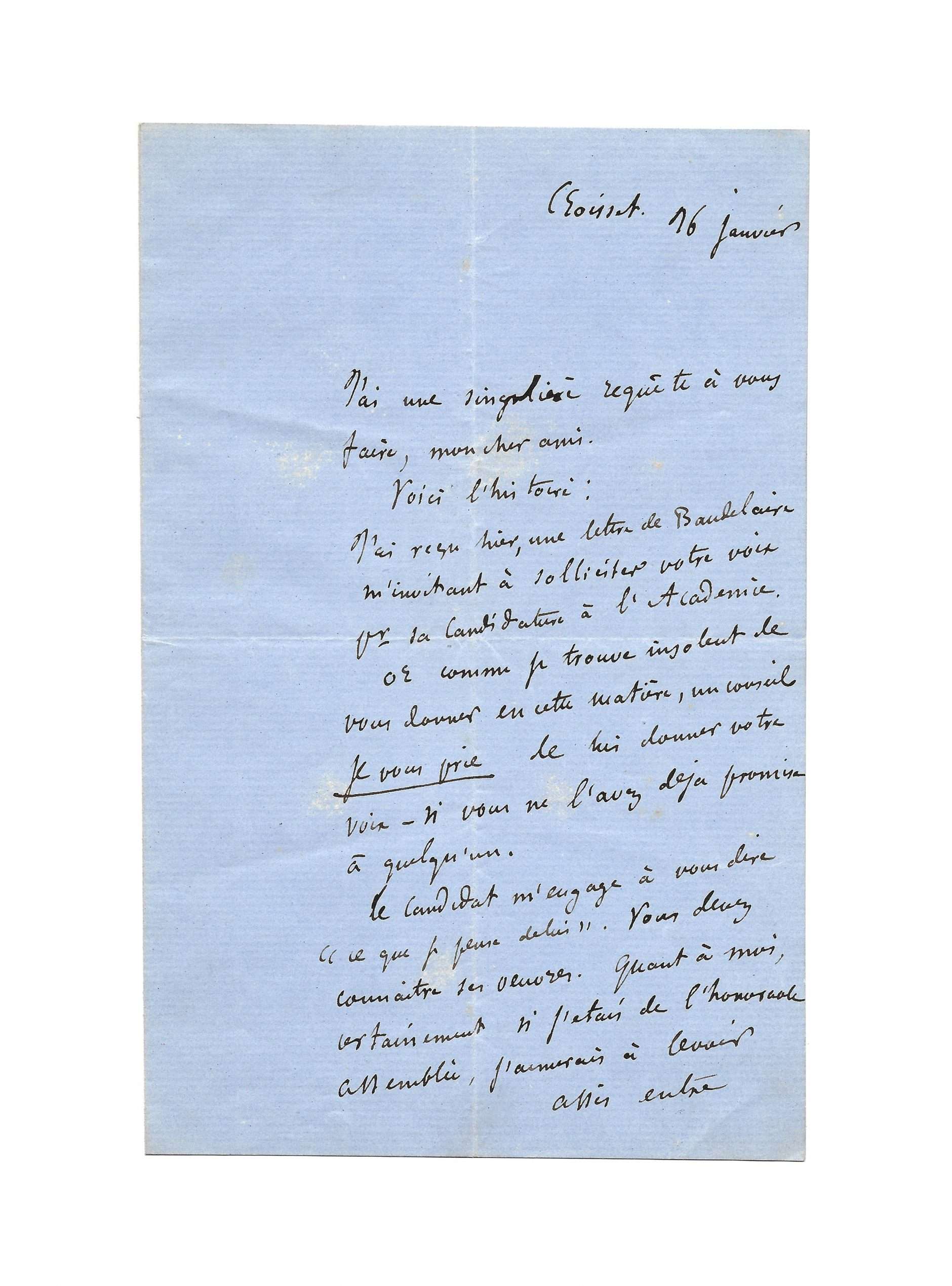 On December 11, 1861, Charles Baudelaire, who had then published nine books, presented his candidacy to the Académie française. At that time, his literary reputation was fairly good: Victor Hugo and Théophile Gautier recognized his poetic talent and the relevance of his criticisms, and the wrath he had attracted following the trial of the Flowers of Evil (1857) attested to a certain success. It was in such a context that he wrote to his mother on 25 July 1861 that, in his opinion, joining the Académie française was the “only honour that a true man of letters can ask for without blushing.” Because the poet’s taste for provocation is not unknown, many of his peers wonder about the seriousness of his approach. Indeed, one hardly ignores his aversion to the bourgeois inter-self, not “as a representative of a social class, but as a representative of a way of life”, according to Hugo Friedrich. The latter adds that “This also applies to Flaubert”, who “becomes alongside Baudelaire the greatest enemy of the bourgeoisie (…) it is a suffering before the lack of spirit of men absolutely devoid of inner anxiety. However, the Académie française is par excellence a cenacle of bourgeois little open to singularity – needless to say that Baudelaire’s poetry largely distances itself from traditional codes. Moreover, the immortals all wear the same habit when Baudelaire is breaking with dress codes.

We then understand gustave Flaubert’s astonishment at this candidacy. Two days before our letter, on January 24, 1862, the poet wrote to the novelist: “I have made a whim, a madness, which I transform into an act of wisdom by my persistence (…) I am told that you are very closely linked to Sandeau (…) I would be infinitely obliged if you wrote him what you think of me [fragment taken up in Flaubert’s letter to Sandeau]. I will go to see him, and I will explain to him the meaning of this candidacy, which has surprised some of these gentlemen so much. » Thus Flaubert expressed his astonishment to Jules Sandeau, himself an academician, and wrote the same day to Baudelaire, informing him that he had asked the immortal to vote for him: “So without understanding anything about your letter, I have just written to Sandeau asking him to vote for you.” Two paradoxes emerge: on the one hand, Flaubert invites Sandeau to vote for his friend while ironizing his intentions and, on the other hand, he speaks much more freely – to the point of mockery – to Sandeau about Baudelaire’s candidacy than with Baudelaire himself.

The term “history” immediately announces Flaubert’s lack of seriousness about Baudelaire, and “seeing [Baudelaire] sitting between Villemain and Nisard” is almost an antithesis. Flaubert despises as much the perpetual secretary of the French Academy as the Bonapartist and humanist to the methods of the sixteenth century. This intuition is probably confirmed in Baudelaire’s letter to Flaubert of 31 Jan. 1862, in which the candidate already suggests that he will not be elected: “some academicians [have] declared that they would not even receive me at home. I made a whim that I do not think of. »

Flaubert adopted a marked position on Baudelaire’s candidacy: he made no secret of it to Sandeau, as if to compensate for his embarrassment in giving himself up frankly to his friend.