« The book is called Alice’s Adventures in Wonderland » 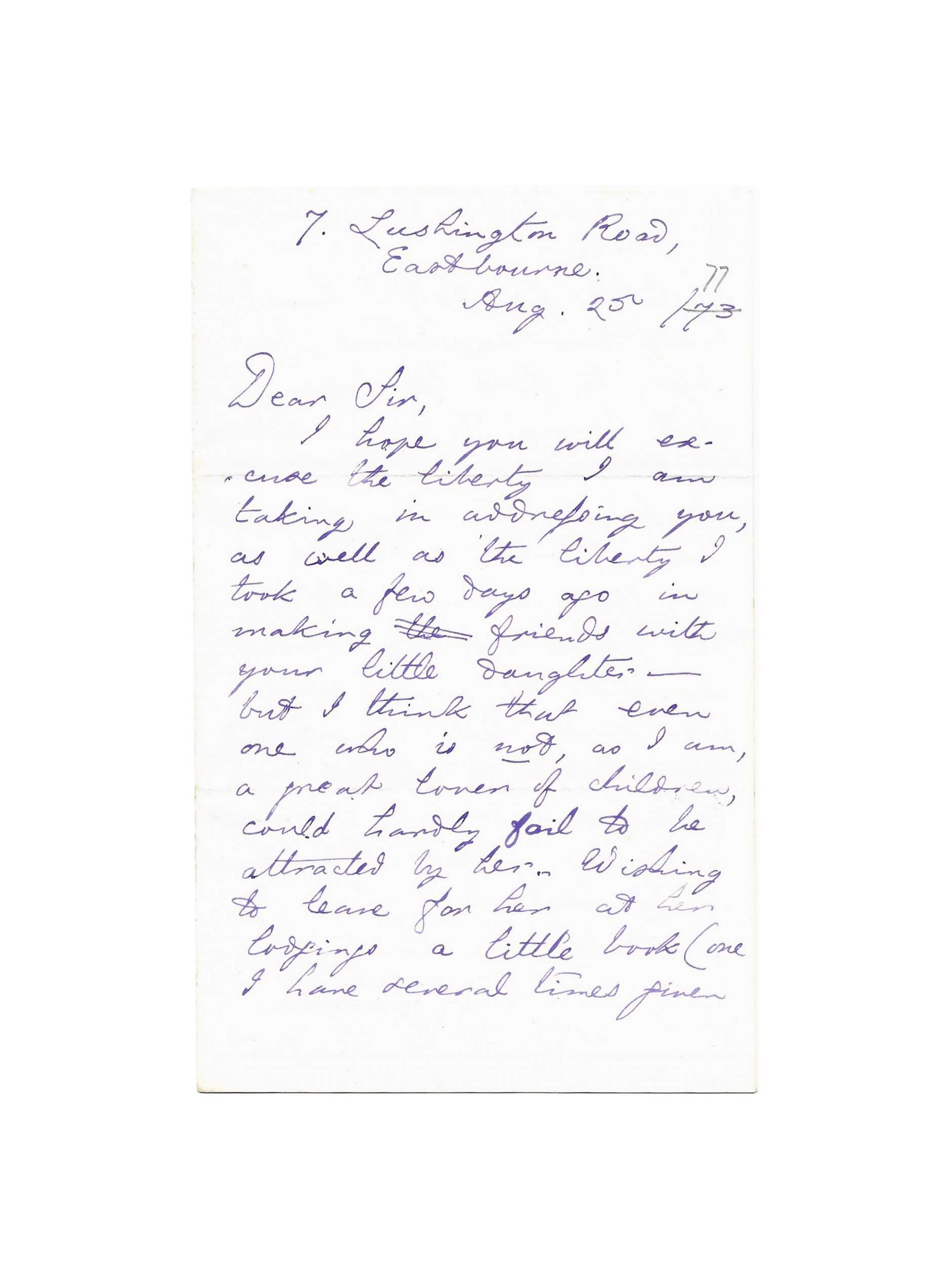 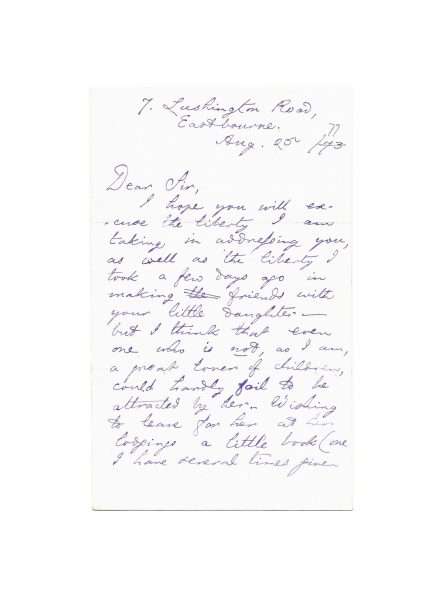 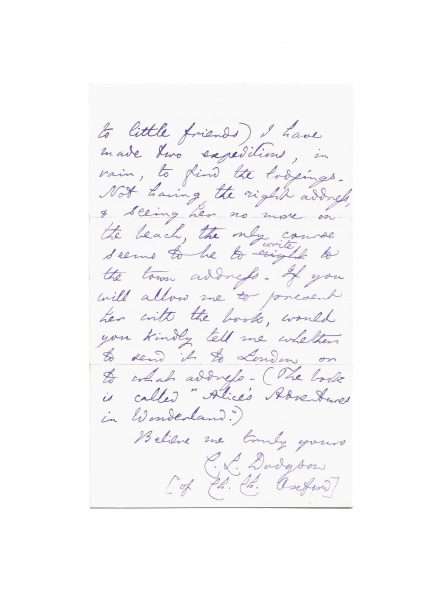 A disturbing letter to the father of his new “child-friend”, Mabel Amy Burton
Eloquent on the complexity of his attraction to children, this missive reveals the subversive and controversial aspect of the writer
He ends his letter with the wish to offer Alice’s Adventures in Wonderland to the little girl

“Dear sir,
I hope you will excuse the liberty I am taking in addressing you, as well as the liberty I took a few days ago in making friends with your little daughter, but I think that even one who is not, as I am, a great lover of children, could hardly fail to be attracted by her. Wishing to leave for her at her lodgings a little book (on I have several time given to little friends) I have made two expeditions, in vain, to find the lodgings. Not having the right address and seeing her no more on the beach, the only course seems to write to the town address. If you will allow me to present her with the book, would you kindly tell me whether to send it to London or to what address. (The book is called Alice’s Adventures in Wonderland).
Believe me truly yours,
C.L. Dodgson (of Christ Church Oxford)”

Addressed to Mr. Burton, this letter was written nine days after the writer’s meeting with his daughter, as reported in his Journal on 16 Aug. 1877: “Went to the pier in the evening and had another happy encounter. My new friend is Mabel Burton. She seems to be about 8 years old. (…) She is absolutely charming and without an atom of shyness. I have never been friends with a child so easily and so quickly.”

At first glance, this letter is subversive to say the least. Indeed, if we do not try to read between the lines, it is neither more nor less than a man in his fifties, whose taste for young girls is not unknown, and who explicitly announces to a father of a family – he does not know then that the latter had died several years ago – that he intends to befriend his daughter, not without ambiguity. “As I am a great lover of children, could hardly fail to be attracted by her.” The use of the terms “great lover” and “attracted” would leave little doubt as to the intentions of its author in a more conventional context.

Despite these considerations, an intense friendship begins, which overcomes the perplexity mixed with amazement of Mrs. Harriet Burton, Mabel’s mother. The girl did not intend to inform the mother of her meeting with the “strange gentleman”, the expression of the girl herself. On August 28, Lewis Carroll wrote a letter to Mrs. Harriet Burton in which we understand that she had agreed that he could send a copy of Alice’s Adventures in Wonderland to his daughter. Two years later, in a letter dated June 12, 1879, Carroll offered to Mabel an outing in London. He nicknamed her “my little kitten”. The interpretation of this tender formula is open to the reader as are many other elements. Indeed, Carroll’s letters to Mabel are imbued with his sense of nonsense, his humor, his taste for the absurd, amply worked in his literary work. This eclecticism of genres contributes to a quest for identity, a founding quest of Alice‘s phantasmagorical world. Thus, although the novel was composed several years before their friendship, the reader can choose to see in Mabel the shadow cast by Alice, a heroine by the proxy of the writer’s gaze.