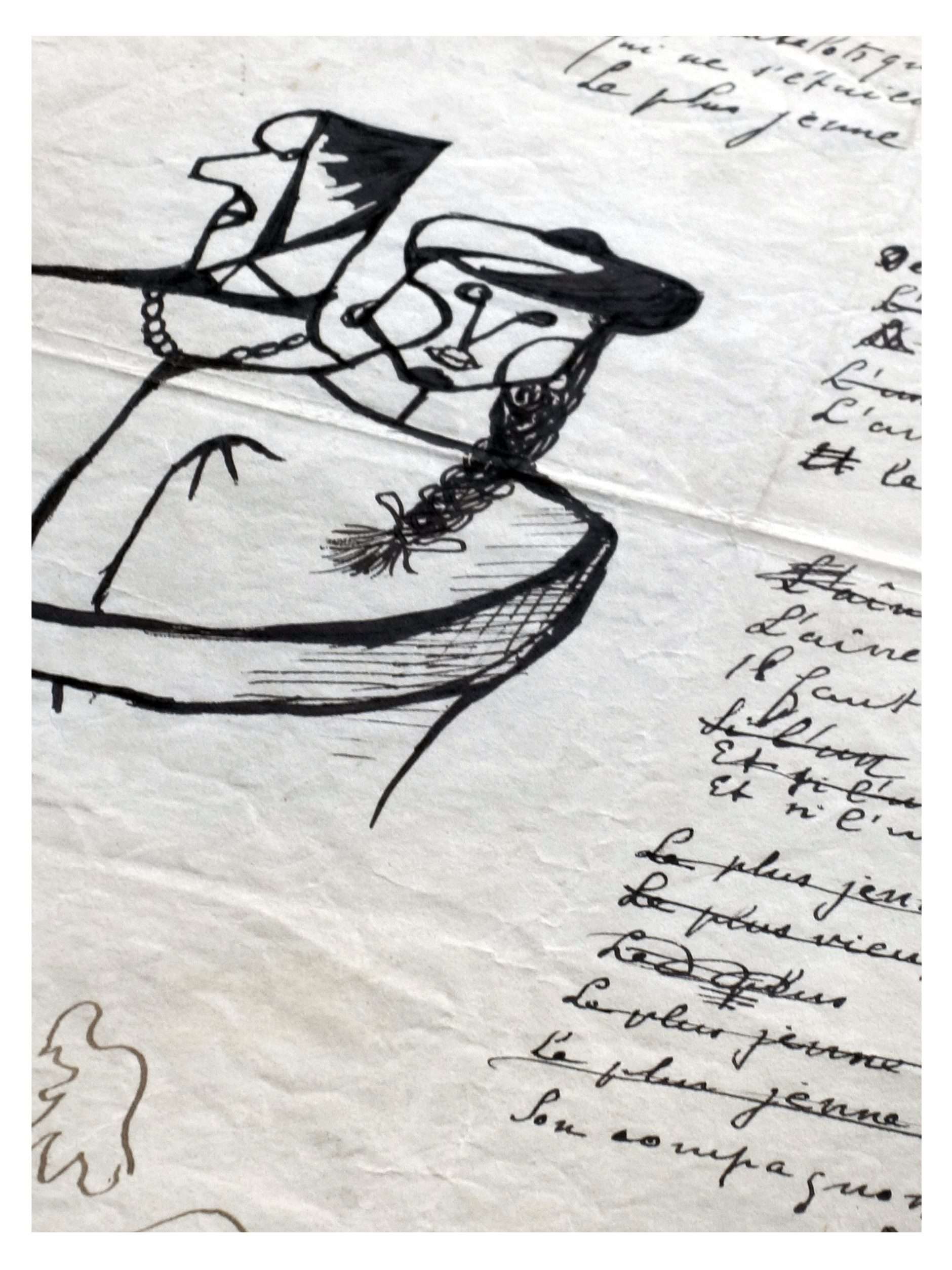 First draft, unpublished manuscript with multiple corrections for “Le Voyageur”, one of the most beautiful and important poems of the Alcools collection
Apollinaire has drawn, amongst various sketches of animals, a superb cubist portrait representing two sailors
The oldest and only manuscript of this poem still in private hands

This document contains two poems or draft poems. The poem, on the verso, is the declension of twenty-seven verses that develop the adventures of two sailors, verses that constitute the heart of the famous poem “Le Voyageur”, first published in the journal Les Soirées de Paris (1912), then in Alcools (1913).

On the front side are six verses that seem distantly related to the poem “L’Arbre” from the Calligrammes collection (1918).

An in-depth immersion in the poet’s creative process

Any lover of Apollinaire’s poetry immediately identifies these verses:

In its first draft, this part of the poem seems to have nearly found its final form, except that in the published version, “tombe” [fall] is put in the past, “tomba” [fell].

Alcools was composed at the junction between symbolism and the avant-garde, as indicated by the mention “1898-1913” on the title page of the collection. We recognize in the poem “Le Voyageur” this eclecticism, especially remarkable in the amalgamation of regular verses and free verses, the respect of certain classical rules mixed with poetic licenses. Thus, the dates fit perfectly with this period of transgression for some, renewal for others, of the poetic canon.

We can date this sequence of twenty-seven verses thanks to the drawings that surround it. The link between the main drawing and the verses is evident from the subject, the ink and the insertion of the drawing into the text. The main drawing, of Cubist style, illustrates how Apollinaire drew in 1909-1910. The poet and Pablo Picasso, leader of Cubism, then met regularly. It is therefore possible to date these verses from the same period. It should also be noticed that the sketch representing a dromedary strongly resembles a sketch on the sidelines of the poem’s proofs “Dromadaire”, present in Bestiaire (1911) and dated 1910. This date is also confirmed by the two polichinelles, identical to a polichinelle drawn in the margin of a manuscript of the poem “Vendémiaire”, dated 1909, and today kept at the Bibliothèque nationale de France. Finally, the Complete Works of the Pléiade collection mention a statement by Fernand Fleuret stating that Apollinaire and himself (who had met in 1909) had fun improvising as a walking in the street when they left the Bibliothèque nationale, and this poem was composed between rue de Richelieu and rue Notre-Dame de Lorette.

The five verses in question form the heart of the poem “Le Voyageur” in that they are taken up as a chorus. They naturally summon the theme of travel, a theme that nourishes the entire text while renewing the topos of reverie, of the quest for identity.

The adventures told in this poem are not without echoing Apollinaire’s own life, who transposes himself into a traveler whom he questions, as if to understand himself. This is how the “Two sailors who had never left each other” form a central point, a point of reference within the poem.

The drawing of the two sailors attached to the text reminds us of a photograph of the poet and his younger brother, as children, in Bologna. Apollinaire’s confession is remembered in a letter addressed to Henri Marineau on July 19, 1913, “Each of my poems is a commemoration of an event in my life. And most often it is about sadness“, the parallel between photography and drawing emerges naturally: One of the sailors drawn carries a chain and the other a braid, as in the verses. This is how Guillaume associates with Wilhelm, travels with him, lives with him… or simply inhabits him. The drawings and verses therefore complement each other perfectly.

The verses on the front side, on the other hand, are older than those on the back; they may date from the time when Apollinaire worked at 65, rue de la Victoire (the address appears on the header), at the Banque centrale de crédit mobilier et industriel between 1903 and 1904. This is evidenced by the spelling as well as the more classic style of the verses. Not appearing in any of the poet’s published works, they are unpublished. Nevertheless, the themes of Norwegian ships and Finland can also be found in the poem “L’Arbre” in Calligrammes (1918), but this is the only distantly related between the two poems.